Why has Wales got the best flag in the world? 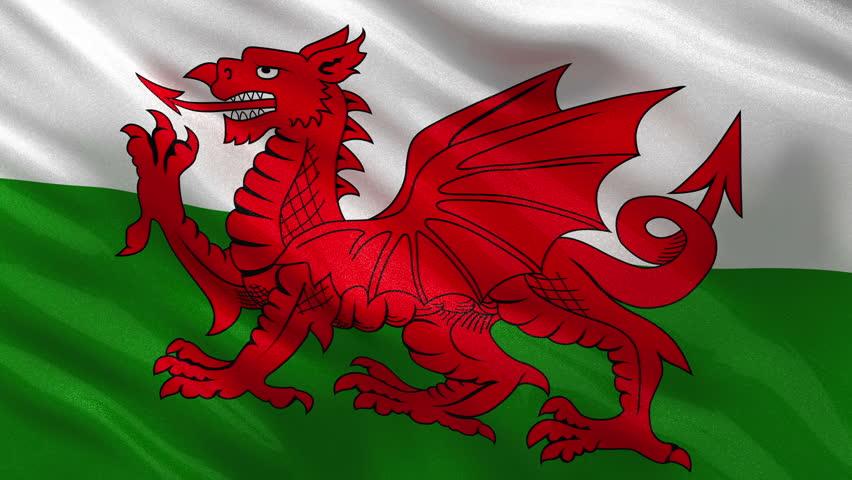 Because we have a massive dragon on it - that's why!

A little about St David

Many of the traditional tales about David are taken from a hagiography written by Rhygyfarch in the late 11th century - Buchedd Dewi ("Life of David"). He claimed it was based on documents found in the cathedral archives. Modern historians are sceptical of Rhygyfarch's claims that it was based on document found in cathedral archives. Rhygyfarch aimed to establish some independence for the Welsh church, having been refused the Roman rite until the 8th century and then sought a metropolitan status equal to that of Canterbury.

The tradition that he was born at Henfynyw (Vetus-Menevia) in Ceredigion is not improbable. This lies south of the coastal town of Aberaeron in Ffos-y-ffin. 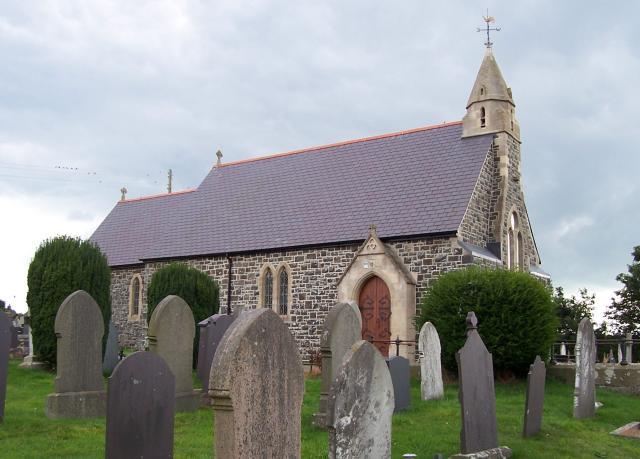 He became renowned as a teacher and preacher, founding monastic settlements and churches in Wales, Dumnonia, and Brittany.

Around 550, he attended the Synod of Brefi, where his eloquence in opposing Pelagianism (a belief in Christianity that original sin did not taint human nature and that mortal will is still capable of choosing good or evil without special divine aid) caused his fellow brethren to elect him primate of the region. As such he presided over the synod of Caerleon (the "Synod of Victory") around 569.

His best-known miracle is said to have taken place when he was preaching in the middle of a large crowd at the Synod of Brefi: the ground on which he stood is reputed to have risen up to form a small hill the village of Llanddewi Brefi stands on the spot. A white dove, which became his emblem, was seen settling on his shoulder.

He lived a simple life and practised asceticism, teaching his followers to refrain from eating meat and drinking beer.

The Monastic Rule of David prescribed that monks had to: pull the plough themselves without draught animals, must drink only water and eat only bread with salt and herbs, and spend the evenings in prayer, reading and writing. No personal possessions were allowed: even to say "my book" was considered an offence.

His symbol, also the symbol of Wales, is the leek (this inspires a reference in Shakespeare's Henry V, Act V scene 1) :

Rhygyfarch counted Glastonbury Abbey among the churches David founded. Around forty years later William of Malmesbury, believing the Abbey older, said that David visited Glastonbury only to rededicate the Abbey and to donate a travelling altar including a great sapphire.

He had had a vision of Jesus who said that "the church had been dedicated long ago by Himself in honour of His Mother, and it was not seemly that it should be re-dedicated by human hands".

One manuscript indicates that a sapphire altar was among the items Henry VIII of England confiscated from the abbey during the Dissolution of the Monasteries a thousand years later.

Tradition holds that it was on 1 March, which is the date now marked as Saint David's Day, Though the exact date of his death is uncertain.

His last words to his followers were in a sermon on the previous Sunday. The Welsh Life of St David gives these as,

"Lords, brothers and sisters, Be joyful, and keep your faith and your creed, and do the little things that you have seen me do and heard about. And as for me, I will walk the path that our fathers have trod before us."

St David's Cathedral stands on the site of the monastery he founded in the Glyn Rhosyn valley of Pembrokeshire. 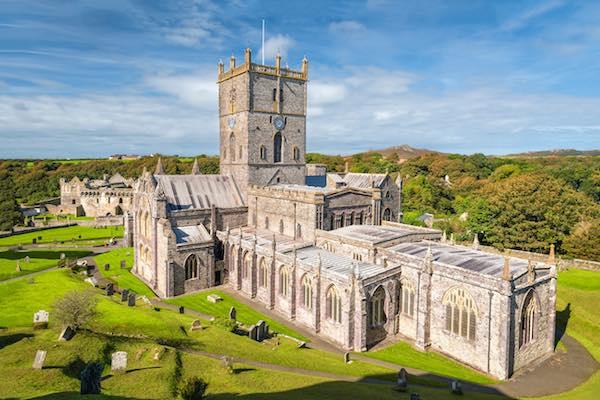 St David's metropolitan status as an archbishopric was later supported by Bernard, Bishop of St David's, Geoffrey of Monmouth and Gerald of Wales.

David was buried at St David's Cathedral at St Davids, Pembrokeshire, where his shrine was a popular place of pilgrimage throughout the Middle Ages.

During the 10th and 11th centuries the Cathedral was regularly raided by Vikings, who removed the shrine from the church and stripped off the precious metal adornments.

In 1275 a new shrine was constructed, the ruined base of which remains to this day (see photo), which was originally surmounted by an ornamental wooden canopy with murals of David, Patrick and Denis.

It was at this shrine that Edward I came to pray in 1284. During the reformation Bishop Barlow (1536–48), a staunch Protestant, stripped the shrine of its jewels and confiscated the relics of David and Justinian.

David was officially recognised at the Holy See by Pope Callixtus II in 1120, thanks to the work of Bernard, Bishop of St David's. David was also canonised by the Eastern Orthodox Church at an unknown date.

Over 50 churches in South Wales were dedicated to him in pre-Reformation days. 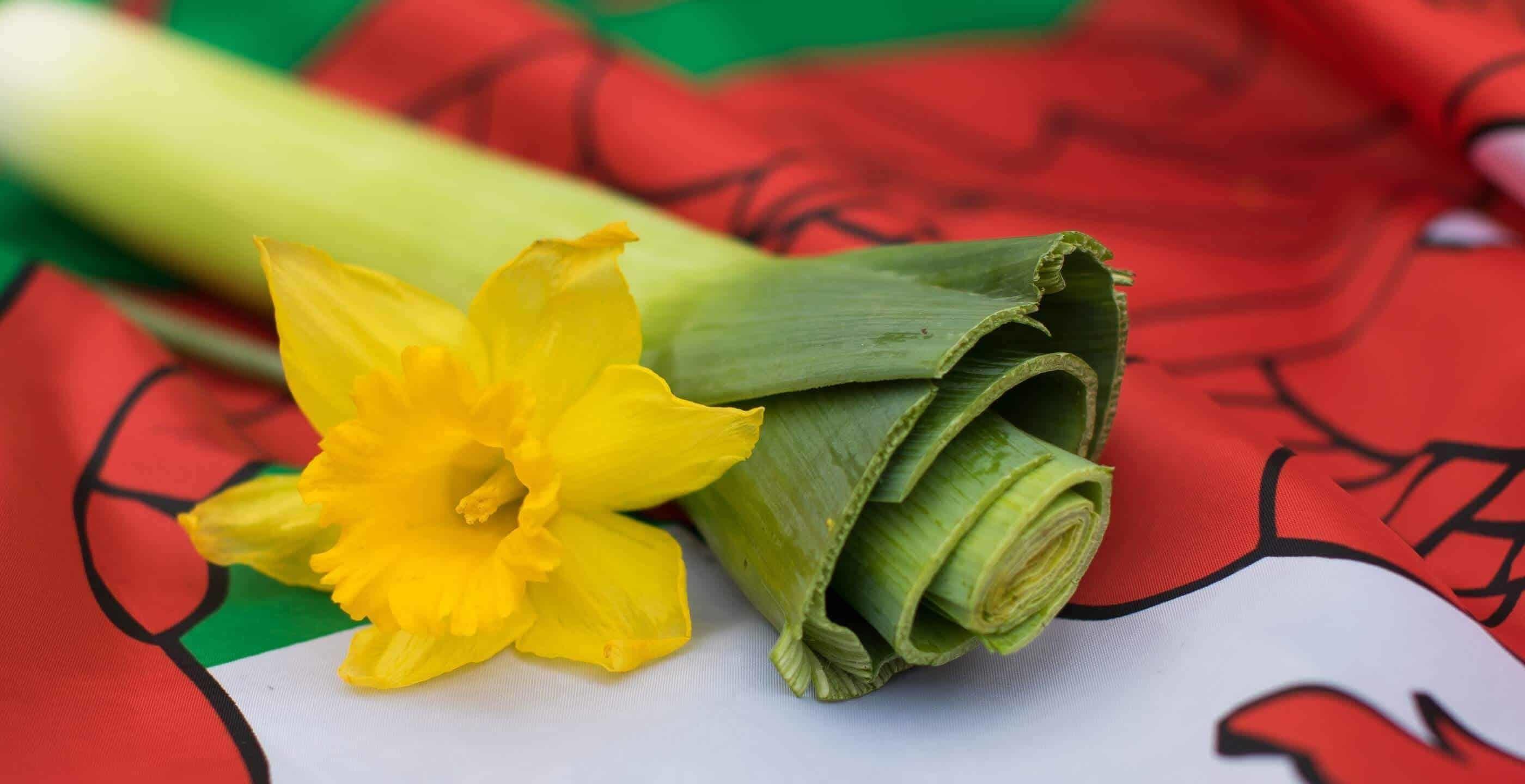 A broadside ballad published around 1630 claimed that the Welsh wore a leek in their hats to commemorate a battle fought on St David's Day. So as to recognise friend from foe, the Welsh had pulled up leeks from a garden and put them in their hats, before going on to win the battle.

The Legend of Miracles

Restored a blind man’s sight when he was baptised by a blind monk and some of the water from the font splashed onto his eyes.

Brought back a child back to life by splashing the boy’s face with tears.

Neighbours struggling with dried up land - David stuck his staff into the ground and immediately a spring sprung out of the ground.

When St David was warned about a deadly poison in his food he broke his bread into three pieces. He gave one piece to a dog and another to a crow,  both died instantly. He then blessed the third piece, which he ate himself, without dying.

He cleansed deadly water at Bath and then transformed it into a warm and healing pool.

He was preaching to a large crowd at the Synod of Brefi and as many of the people couldn’t see or hear him, David managed to raise the ground beneath him into a tall hill so his sermon could be heard by all.

This confusion means that both have been adopted as national emblems. It is said by some that the daffodil was encouraged as it does not have the nationalistic overtones that the leek has, with its association with the defeat of Saxons.