Have you heard of Snake Oil Salesmen?

Snake oil is a term for deceptive marketing.

It comes from 19th-century Chinese railroad workers who used medicine made from the Chinese water snake. The stuff worked; rich in Omega-3 fatty acids, it effectively treated conditions such as arthritis and bursitis. Americans were amazed by its healing powers.

The term took on a new meaning when fake patent medicines promised to cure every disease known to man. Made up of mostly alcohol, this snake oil convinced people they felt better. Since America did not have Chinese water snakes, some entrepreneurs used rattlesnakes. Perhaps the best known of these snake oil salesmen was Clark Stanley, the self-proclaimed “Rattlesnake King,” a former cowboy who claimed he had been tutored by Hopi medicine men in Arizona. He deceptively used mineral oil to make his “snake oil” potent. Making a show out of his treatment, Stanley pulled a rattler out of a sack, slit it open and dropped the snake into a pot of boiling water. 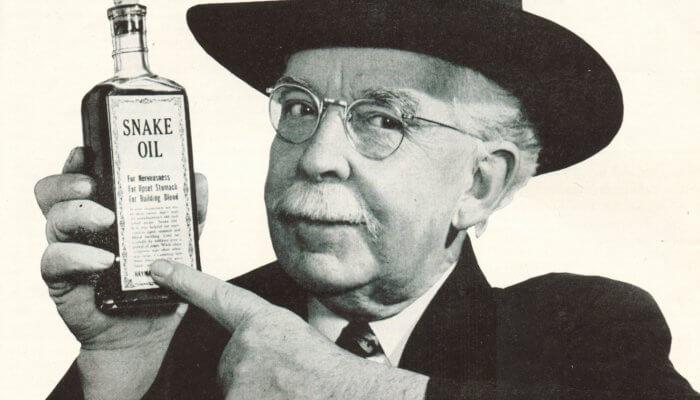 Have you noticed how many companies attempt to sell products using unsubstantiated claims?

We don’t do that!

Apart from anything, it's against the law. The MHRA's Borderline Section investigate companies who make medicinal claims on the products they sell.

We know that by using natural ingredients renowned for their complementary properties and uses, are a great asset to you, the customer. We just cannot make unfounded claims as every one of you, our customers, react differently.

Medicinal claims have to be backed up by trials, clinical testing and licensing. This costs millions of pounds/dollars/euros and takes years to be licensed for a single health condition. No wonder pharmaceuticals cost so much when they are released!

We just rely on your word of mouth - after all 3,500 repeat customers in 2 years can't be a bad thing!